It’s nine days into the month, and would you believe that we are all going strong? You can track Tammy’s, Miranda’s and my word counts on our NaNoWriMo page, but Ian is doing the Young Writers’ Program, and we can’t make a word widget for him.

But he’s been the most exciting one of us! He was reluctant to do it, but I got him set up with the older iPad and the keyboard cover and his Google docs and he started typing away. He started running out of gas after day 2: his original idea of writing about his predictions for an upcoming iPhone SE2 ran its course. He talked to me about it and I suggested to him that he needed to have something happen. Have himself in the story, and have our cat Squeaker be a character like Snowy in the Tintin comics who sarcastically commented on things. The next thing you know, Ian’s excitedly writing each night and tonight he really went all out. His target word count each day is 150 words. 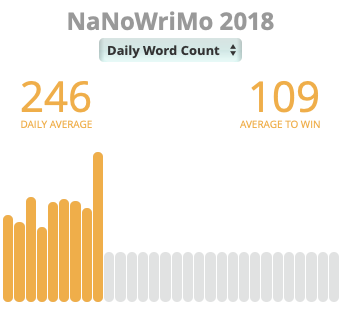 I’m very proud of him. It’s great to see him having fun with this. That’s what it’s supposed to be about.