I got a couple of rolls of plastic cake collars a few weeks back. I was going to get a pre-sized metal one, but this idea sounded better because I could custom size it to my cakes (and it’s reusable, too).

Today I made a lemon sponge cake with layers of cream and lemon curd topped with candied lemon slices (they were too bitter). It turned out beautifully. Unfortunately, once it was cut it had a massive cream-alanche. I need to use more stable insides (like a mousse) next time.

Today was the unofficial De Ronde van Cowtown (a play on De Ronde van Vlaanderen, the Tour of Flanders). In the spirit of the namesake race, it is run in marginal weather at the beginning of the season, and searches out all of the hills it can. I have known about this ride for a long time, but last year and this year, the official ride was cancelled due to COVID. So one of our club ambassadors set up an unofficial ride and about 17 of us gathered this morning. We split into groups to abide by the Alberta Health guidelines.

The ride started at 10 am downtown, but I put in 20 km riding from home first. It was chilly (-6 on the weather channel, but I never saw less than 1 degree) but dry and no ice to worry about.

Let’s just say it was a very long day. It was my longest ride in duration ever, almost seven hours of riding time. Elapsed time including breaks and time not moving was almost nine hours.

The ride was successful, but right now I feel like I’ve been hit by hammers. Most of the day I rode with Justin, Hannah and Colette along with Rob, Paul, Ron and John in the “slower” group. Nevertheless, we took shorter coffee breaks and actually spotted the “speedy” group a number of times and then caught them just in time for the cruise back to the starting point.

My new cycling computer worked amazingly well. It has a larger, color screen than my old one, and considering I spent most of the day following the route on the map, that was most welcome. Most of the people on the ride were on gravel bikes, but Wing, Colette and I were on our road bikes. It wasn’t too bad, except for some sections of dirt, mud and gravel. But I made it.

Happy Easter to all. It’s a quiet day here. Even if the weather was nice today, (which it isn’t) it still would be quiet. Third wave of the pandemic, and all that.

I’m also nursing my ribs. I hurt them in a relatively minor fall when snowboarding at Nakiska on Thursday. I aggravated them by trying to go for a long bike ride on Friday and now I’m paying the price.

So that’s how the morning started with me sleeping on the couch. We’ll call it guarding the eggs, ok? 😜 The kids came down and found the eggs.

Dinner will be ham. Tammy made some buns as well. Looking forward to that. She also made a checkerboard Easter cake, but it started to fall apart during the icing process. It was very reminiscent of what happened to her birthday cake. Perhaps our cakes are now cursed? We’ll see if it’s still standing at dinner time. I’m sure it will be delicious.

Ham dinner was delicious. The ham was nice and tender and juicy. The cake had some ideas about falling apart, but stayed together long enough. A large crevasse opened up on one side, bringing to mind a Minecraft world. Ian’s and Tammy’s Lego figurines were added to complete the effect.

Finally got around to creating a Canadian Blood Services account at lunch today. I wanted to donate soon after turning 17, but they were booked through January and February. At around 6, mom and I went down to the Calgary Shrine Event Centre and gave blood. It was a successful outing and my donor card will arrive in 6-8 weeks (and I’ll know what my blood type is). Highly recommend it (you get free snacks and drinks). 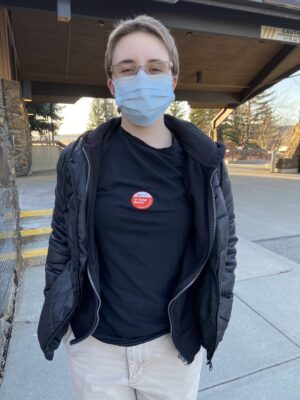 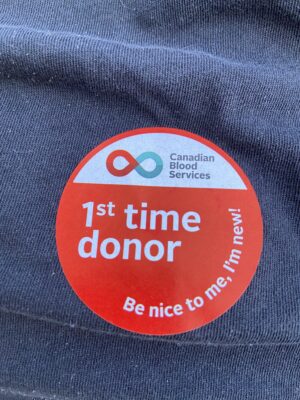 Originally, I tried buying a battery for my Titanium PowerBook with the money Dad sent for Christmas. But when the eBay seller didn’t come through, I got a refund. I’ve been at a bit of a loss as to what to do. I wanted to get something that I probably wouldn’t for myself.

When Apple discontinued the HomePod two weeks ago, I just shrugged. But the more I thought about it, the more I thought that I wanted one. There have been a lot of podcasts discussing the axing of the original HomePod in favor of the newer HomePod mini. The consensus was that the HomePod sounded exceptional (compared to the Amazon and Google smart speakers) but were expensive and always were a little difficult to use with Siri as the digital assistant. One podcaster I listen to shared that he’d gone out and bought two more when he heard about the discontinuation.

I know that when it came out, I was really interested. I ended up getting Amazon Echo devices because they were inexpensive enough to scatter around the house. There was no way I was buying a half-dozen HomePods at $400+ a pop. The Echoes are fine. We use them a fair bit for music, alarms, home automation, shopping lists, timers. But I wanted to get the smart speaker that wasn’t just “fine”.

I looked online, and within a week of the announcement I couldn’t find any for sale. But when Miranda and I were waiting in line outside the Apple Store this morning to drop her laptop off for keyboard replacement, I spotted a black HomePod next to the Apple TV display inside the store. I mentioned it to her. Why did they have a HomePod out on display when they weren’t selling them anymore? She pointed out that there was another over by the iPhones. I asked the Genius (same guy as when I dropped off Ian’s a couple weeks ago!) about it and he craned his neck and said that it’s probably because there’s still a few for sale. There were four boxes on the shelf. White only.

Yeah, it’s not the smartest time to buy one, but I wanted one. I also was pretty confident I could return it if I didn’t like it. But it sounds really nice. And it does handoff from an iPhone like nobody’s business.

At this rate I’m really not going to want to go back to the office. I’ve got my great monitor, microphone and now a nice speaker to listen to tunes on.

It’s the end of March, and I’ve survived work long enough to make it to Spring Break. It’s not exactly the kind of “Spring Break” that you see in the movies, though. Mostly quietly getting things out of the way and being helpful while Tammy still works. Her end of term isn’t until April. The kids have been industrious, cleaning their rooms up. We didn’t even ask them to. I’d like to describe the old state of Miranda’s room as a crap sack, but that would have been an insult to crap sacks everywhere. Now it’s wonderful. Ian’s desk and shelves are all neat and everything in its place. I think he wants the rest of the room to look as good as his new desk chair.

Tammy and I got our taxes done, and I got the car registration renewed today. Tomorrow, Miranda and I will be going to the Apple Store to drop off her MacBook Air. Both she and Ian ended up having troubles with the butterfly keyboards (repeated characters with single keypresses, or no character when pressing a key). We took Ian’s in and had the keyboard replaced the week before last, and we’ll take in Miranda’s tomorrow. Really tempted to trade these in for new M1 MacBook Airs for them. Might happen.

Originally planned to go skiing on Sunday, but a storm blew in. 100 km/h winds, -11 and snow later in the day. We scrubbed our trip, worried that we would get stuck or blown off the highway. We are planning for Thursday now, but the weather’s supposed to be sunny and about 14 degrees. Spring skiing anyone? This will officially be the worst skiing season for us ever.

Oh well. Skiing’s not the point. Recharging is, and we’re doing some of that.

A little painful, but who cares, right?

Ian had the afternoon off today because of parent-teacher conferences. So I put him to work building his new chair. About a month ago, the back to his old chair broke off. We tried getting to Ikea to let him try out some chairs, but it was lined up around the block. Tammy and Ian went to Costco, Canadian Tire and Staples looking for chairs, but selection was wiped. Then we back-ordered an Ikea Markus chair but the next day got an email from Ikea telling us we would be refunded our money because they didn’t know when it would be in stock.

Finally, we ordered an Ikea Renberget, which was showing as in-stock and the box arrived today.

Ian got to work and about an hour later, was successful.

Today it’s eight years since Tammy and I closed the deal on our home in Calgary. What brought it to mind was Tammy commenting about how “brown” it was outside. She’s not wrong.

The snow has melted in the last couple of weeks, revealing the dead grass and dormant plants underneath. This was the way it was when we were in Calgary house hunting. It was Tammy’s first time in Calgary since she was kindergarten age, and she was seeing the city at its worst. In weeks, there will be green shoots and flowers (with intermittent snow) and spring will begin in earnest. But for now, it’s brown.

Updated the next day…

If you don’t like the weather in Calgary, wait 15 minutes.

As we have arrived at the one year anniversary of the pandemic striking in Canada, I’m starting to see more articles online about “after the pandemic” or what to expect “post-pandemic”. I don’t consider myself to be overly superstitious, but damn. That’s asking for karma.

Yes, we have to plan for the future, but with the variants of concern starting to overtake the original strain of the virus and Canada barely out of the starting blocks for vaccinations, I think it’s a bit early. Even though I have made plans for the Tour de Victoria in October, I am fully aware that it could come to naught.

I want things to get back to normal for many reasons, not the least of which is the kids. We’ve been able to avoid a lot during the pandemic but my heart still aches for the fact that they’ve missed a year of normal growing up and friends and social gatherings. And that’s coming from me, who was never the most socially-active teenager.

Stay isolated, people. Get your shots when you can.